Several recent reports in websites and magazines might give one the impression that rhino poaching is a recent phenomenon, but the truth is that it never really went away. However, it has gone high-tech and there has indeed been a surge, most notably in South Africa, where it has been thought that the two African species were perhaps somewhat less vulnerable that in other areas of the continent. You can follow the ugly story by starting at the BBC website here, which has links back to previous accounts. Swara, the fine magazine of the East African Wildlife Society also has an account in their April-June 2011 issue. If this and other African conservation things interest you then try a subscription or visit their website here.

There is one potentially good news element to all this, and that is that a Thai man named Chumlong Lemtongthai who has been implicated at the head of one poaching ring and is called a rhino horn ‘kingpin’ was recently arrested in South Africa. He will appear in court on July 15. I hope he doesn’t get away with as much as a Malaysian man on whom the prosecutors reportedly had enough to put him behind bars for mare than a lifetime. He plea-bargained his way into a paltry sentence of less than three years.

What those who have followed the sorry saga closely are well aware of is that rhino horn has been a target of poachers for well over a hundred years. There were once armed gangs scouring Sudan and other countries in that region to supply white rhino horn to buyers.

At least the print media now have it right, rhino horn is not a commodity to help old men get it up. The principal use is in the Orient, or even among oriental people who believe that it is a medical necessity for many ailments. Over 70% of Korean doctors believe it is essential. Secondary uses are as decorative items. 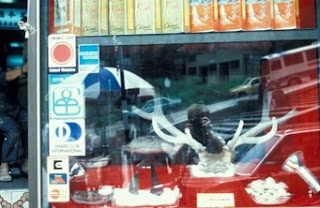 This photo was taken by Jimmy Suttie in Korea and show rhino horn for sale in a pharmacy. Look at the very bottom where there are two short pieces.

With all the high-tech equipment it is becoming increasingly difficult to prevent the poaching. Sadly it goes back to the basic statement by Kenya ex-game wardens Peter Jenkins and Ian Parker, among others, that the only way to ensure rhino survival is to keep them in heavily guarded refugia. That would be hellishly expensive.
Posted by Jerry Haigh at 10:55 AM