The widely reported story about the destruction by fire of one of Uganda’s UNESCO Heritage sites in Kampala lacked one thing. This was any photos of the remarkable structures at the Kasubi tombs before the fire. One such report came on the BBC web site here and showed the fire itself and a crowd scene. For those who know the place, the fiery skeleton of the main building seen in the BBC report is easy to discern. 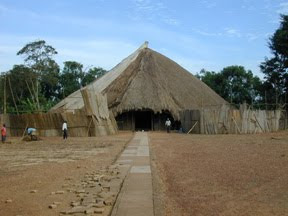 Here are a few pictures taken during one of many visits that my veterinary students and I made in the years that we went to Africa to study the wildlife x human x livestock interface and took time out for some cultural enlightenment. 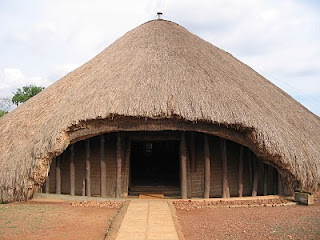 During the visits we walked up a long path, which gave one a great view of the huge thatched building, about 40 metres wide. 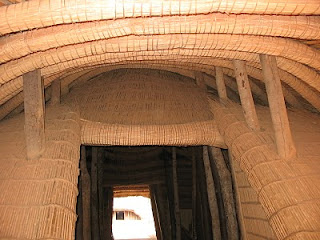 Under the awning, with its intricate woven thatch, one sat in front of the pictures of the last four kings, with spears and other memorabilia on show, and listened to the guides tell us about the history of the people and the site. 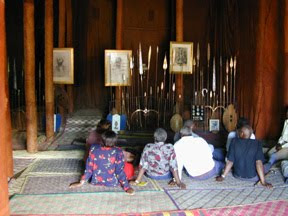 The tombs, built in the 19th century, are where the last four kings of Buganda were buried. Buganda, founded in about 1500 AD is the largest of the four kingdoms of what is now Uganda and once controlled a big swatch of land from Lake Victoria to the Kagera River that begins its journey to the lake in Rwanda. Kampala lies right in the middle of the Buganda region. Indeed, the tomb site and the king’s palace are in the heart of the city.

The kingdoms were abolished in 1966 and it was only when President Museveni allowed their reinstatement as cultural institutions with no political power in 1993 that they came to the fore again. King Ronald Mutebi is the current king. His role is largely ceremonial but it would seem as if he, or his advisers, have been flexing their muscles and there have been some confrontations with Museveni’s government. Last year there were riots after the government blocked Ronald from visiting part of his kingdom.

The latest riots occurred after protesters prevented Museveni, who is an Ankole from Western Uganda, from visiting the tombs where the fire was destroying the above-ground structures, which were made entirely from vegetable materials and would have made a natural fuel for a rapid burn. Sad.
Posted by Jerry Haigh at 9:57 AM