http://www.galleliteraryfestival.com/
One real advantage of going away on a relaxed holiday is that one gets to do plenty of reading. Furthermore if one is doing the tourist thing and moving from one location to another one gets to pick up all sorts of stuff along the way. Many hotels have shelves in odd corners that allow a “leave one, take one” option. While in India & Sri Lanka on my most recent trip I read about ten books. More or less. I started and abandoned one after about four paragraphs. After a few pages I discovered that I had read a couple before, but several were brand new. An absolute gem was Sebastian Barry’s The Secret Scripture. It was short-listed for the Man Booker Prize in 2008 and was listed by the British Sunday Telegraph as a Book of the Year. Critic James Naughtie of the Sunday Telegraph wrote that it was “One of the most moving stories I’d stumbled across for many a year.” I fully agree.

In most hotels we found that crime or police novels of various types were the most common currency. PD James, Patricia Cornwell, even a couple of very worn Agatha Christies in their old Penguin editions. These reliable holiday reads appeared in several languages other than English, most commonly German and Dutch, the latter more so in Sri Lanka, where there is a strong link back to the Netherlands. A “new to me” delight was Terry Pratchett’s Mort. It was the fourth of his Disk World novels. For those who know his work, I am sure I’m preaching to the choir. A comment on the Google site uses the phrase “profoundly irreverent novels” about his work. His imagination is simply stunning. Who else could have thought up the idea of the shrouded and scythe-armed figure of DEATH taking on an apprentice named Mortimer (Mort for short)?

There were also a few Ian Rankin novels. A new one, to me at least, was Doors Open, the story of an art heist set in the Edinburgh that Rankin paints so vividly. Naturally there were some Inspector Rebus stories.

Ian Rankin turned up in quite a different way. In Galle (pronounced without the ‘e’ like the bladder), which lies almost at the southernmost tip of Sri Lanka I browsed the shelves in an attractive art and curio shop in this ancient fortress city. My eye was at once caught by several copies of the very smartly prepared program of the 2010 Galle Literary Festival. The event, which we had just missed, ran from Jan 28th to Feb 2nd, and had many similarities to Saskatchewan’s own Moose Jaw Festival of Words.

One of the sessions was called Life Sentences. The intriguing blurb under this heading stated “Ian Rankin tells us how his most famous detective, John Rebus, came to be, and finally to retire.” 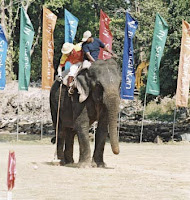 The Festival, in its fourth year, was the brain-child of one man, Geoffrey Dobbs, but as he states in his welcome it would not happen without generous sponsors and a big team of volunteers. -Apart from managing a really nice hotel called The Sun House, Geoffrey wears a very different hat. He is chairman of the Ceylon Elephant Polo Association. There’s an entertaining report about the 2007 tournament played at the Galle fort that you can find as a pdf here http://www.dcelephantpolo.com/Artices/EquestrioDubai.pdf or in HTML format here

There were lots of other well-known and not-so-well known authors. There were sessions for children in several age groups and useful guides on accommodation, restaurants, whale watching and so on.

We took up the whale-watching option a few days after the conference. Until you have been sixty metres from a blue whale it is hard to recognize how enormous they are, and we only saw the so-called pigmy blue whale, a mere 25 metres long! Researchers think that they spend their entire lives off the coast of the island, making this one of the very best places to see the world's largest ever creature.
Posted by Jerry Haigh at 5:09 AM