My In Box of yesterday carried an interesting Kenya-based article from the Wildlife Diseases News Digest. The somewhat over the top headline “Kenya on the brink of recording big five extinction” is at least an attention grabber. It came from the East African Standard and highlights, once again, the problems that plague the country’s wildlife situation.

The article, dated June 7th, is by one Joe Kiarie and tells how four cows were killed by lions in the community of Oloolaimutiak within the Masai Mara National Reserve. Naturally the villagers reacted and laced the carcasses with poison. ONE young lion died within 100 metres of the scene and four others are missing. The inevitable “by-kill” of vultures occurred.
No poison is named, but it is a racing certainty that they used Furadan. Important questions remain. How did they get the stuff? Was it some residual stock or were they able to purchase it in a village shop? In the past many shops carried signs such as “Agricultural Supplies” and in them Furadan was readily available. As those who saw the CBS 60 Minutes show in March this year will recall the manufacturers of the chemical stated that they would discontinue its supply. If you missed it, I referred to it in my blogs of March 15th & 29th.

It is not just lions and poison that Kiarie mentions. He states “Three days before, a poacher was shot dead after he was caught removing a horn from a black rhino in Laikipia.” 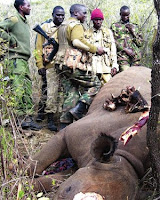 This picture accompanies his article. He goes on to mention some other species.

These include roan and sable antelope (the black one with the huge horns), Hirola, or Hunter’s antelope and Grevy’s zebra. Rather than bore with numbers, the Grevy’s shows the trend. In 1970 there were thought to be some 20,000 head in East Africa (many in Ethiopia). Perhaps there are 18,00 today, and many of these are on private reserves.

This picture, taken by Dick Neal in Kenya in 1975 shows a mixed aggregation of the common or Burchell’s zebra, with their broad stripes, and the taller, large eared Grevy’s with the narrow stripes. It has been suggested that there may be fewer Grevy’s zebra than there are the much higher profiled black rhino in Africa.

In a related article by Beatrice Obwocha of the 11th of May this year the plight of one of the world’s great sights, the massed ranks of flamingos on Kenya’s Lake Nakuru. In a nutshell, the numbers are at an all-time low. There may not have been more than a thousand of them after the long drought between November and March. Contrast this with numbers that were once thought to exceed half a million.

And why? Partly the drought (an estimated 100,000 returned between March and May), but a much bigger and long-term problem comes from human activity. The water source for the lake lies on the escarpment above it. Water levels are down, alkalinity is up, and the algae upon which the birds feed are not thriving. On top of this the nearby town of Nakuru has grown enormously and the sewage and agricultural waste from the surrounding farms all drain into the lake.

What neither author mentioned up front is the core problem of human population expansion, which inevitably leads to crowding for space and diminishing resources. When people’s livelihoods and way of life are threatened they will react, either vigorously, in the case of lion attacks, or insidiously, even unknowingly, in the Lake Nakuru example.
Posted by Jerry Haigh at 7:06 AM