When I hear the phrase “think outside the box” my first reaction is cliché. However, zoologist Lucy King, working in Kenya has done this in a way that means exactly what it says, as long as one accepts that the box in this case is a traditional beehive.

Rural Kenyans, particularly the Ndorobo, are avid honey eaters, and they make hives for wild bees from hollowed out logs. This thorn tree close the Uaso Nyiro river in Laikipia District has at least seven such hives hanging high up in it. Unfortunately I cannot get this one to upload in its true colours (it was taken over 30 years ago & scanned from the original slide), but the hives appears near the top as longish dark blobs. 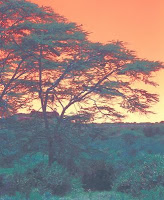 One thing that elephants do not like is bees. Their skin is probably impervious to the stings, but around the eyes, and especially inside the very sensitive trunk, bee stings obviously hurt. One semi-tame bull elephant was described as “going berserk” when stung there. They may not get ‘bees in their bonnets’, but ‘up the trunk’ obviously does the trick.

If African bees are disturbed they are likely to swarm and attack.

She also writes about her research in her own web site.

The ‘outside the box’ idea was to use actual beehives as part of a crop-protection fence after Lucy and her supervisor found that elephants could even be drive off if they heard the sound of buzzing bees.

As you can see in this photo that Lucy took, and has released to the media, farmers can can construct a fence that has beehives strung on wires every few metres around their plots of crops. Any touch of the wires by an elephant (or a careless human) will set the wires a-twanging, and the hives a-swinging. Ouch!

While the technique is not 100% effective it has helped reduce elephant incursions considerably. The by-product is delicious honey that the farmers can sell.

Elephants are magic, if they do not raid ones crops and terrorize ones family.

There are several other reports of Lucy’s work that she is carrying out as part of her D. Phil (Oxford’s equivalent of a PhD) program. For instance this one of April 2008 shows a transcription of an interview she gave about her work.
Posted by Jerry Haigh at 7:37 AM