This post is much longer than usual, and has 21 photos. I have compiled a bunch of stories from our Uganda trip & tried to distill them into one more-or-less coherent. It is also in a new format. Hope you like it.

For seven years students of the Western College of Veterinary Medicine at the University of Saskatchewan have spent a month in Africa studying the complex issues involved in the human x livestock x wildlife interface. Our students return to Canada with a whole new comprehension of a world that they can hardly have imagined.

An important part of that exercise has been our developing relationship with two primary schools located in the Queen Elizabeth National Park protected area. The pupils at these schools live right among the wild animals in the park and it is our hope that by connecting with them we will help them understand the role of conservation in the lives of everyone.

Each year we have taken gifts from Saskatoon. These have included soccer uniforms and other sports equipment, ‘t’ shirts and toys. One of the most important things we have done is to take cash that has been used to purchase essential supplies ranging from exercise and textbooks to school desks and paint for classrooms. In each of these instances the money that has been donated by so many Canadians has been circulated in the local economy, ensuring that crafts people and local businesses benefit as well as the children.

In totally unexpected displays the children of both schools have put on concerts that moved us all. 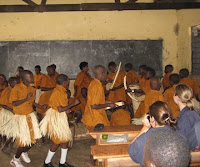 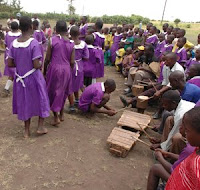 Xylophone and drums accompany dancers at the schools.
Their musical instruments and costumes were purchased with the money sent by our generous donors. 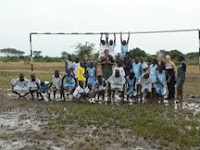 Sports days in Uganda – soccer and volleyball after a heavy rainstorm. We must have been mad, but the kids (of all ages) enjoyed it. Both the white and blue uniforms were donated in Canada, and the money for the posts and nets came from cash donations that we took with us.

One of the lighter moments came in 2007 when we had given each child at the Equator Highway Primary School a woolly toy along with exercise books, pencils and coloured crayons. This school is an AIDS orphanage, with over half the pupils lacking a parent. Many had never received a gift in their lives. 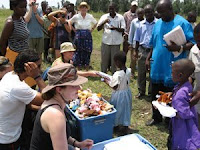 We could see that the toys were frightening some of the smallest children, and it was then that Kelti, one of our students, had the bright idea of taking a little girl over to the bus in which we had arrived. The bus has a metal tail pipe, and the magnetic hands of the toy monkey latched on right away. Within moments children surrounded the entire bus and brown and white toys hid every metal part. Children who had been given non-magnetic polar bears or pink flamingos were of course puzzled as to why their gifts did not stick. Just as puzzled were the children whose monkeys did not stick to the plastic parts of the bus. In the excitement not a single photo of the monkey-festooned bus was taken, although we Canadians had thirteen cameras between us. The memory will have to be preserved in the mind’s eye.

In the past two years we have been privileged to take hundreds of knitted Teddy Bears to the schools. They were crafted by ladies in Saskatoon and Weyburn who call their groups “Teddies for Tragedies.”

We also played soccer here. The boys won 1-0 and they were only too happy to pose with us for the after-match pic. NOtice the green uniforms. There are now Green and Whites in Uganda. What else would you expect from a Saskatchewan perspective?

The soccer balls and uniforms that we brought from Canada were a big hit. The Arsenal and Man U. flags were recognized at once & greeted with prolonged clapping by the boys. Girls do not play soccer in Uganda, but they are dab hands at volleyball and net ball.

A major goal for the students who came to Uganda in 2009 was to raise funds for a project that would emphasize the need for conservation. To this end we investigated the possibility of purchasing a complete solar powered system at Kasenyi School. 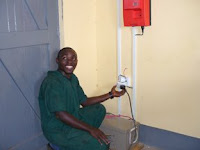 The system was installed on Feb 9th 2009 when a technician from Ultratrec, Kampala, traveled to Kasenyi. There was an interesting element to this installation in that the technician, named Mugagura Robert, originally came from the nearby town of Kasese. He had been orphaned at an early age before being sponsored to complete his schooling.

An official opening was carried out on Feb 15th. Dr. Margaret Driciru, acting chief warden at QENP and Mr. Kagoro Wilson, the Community Conservation Warden, attended the event as the official representatives of the Uganda Wildlife Authority.

Dr. Driciru and Dr. Joanne Haigh conducted the ribbon cutting ceremony before we all trooped in for a delicious lunch and a drink of soda.

This was followed by speeches by the headmaster, Mr. Kiiza George and other village dignitaries, Dr. Driciru and Mr. Kagoro. After a lunch had been served a DVD about hippo conservation was shown to all assembled, including students from the school. This was the very first time that any of them had ever seen a television, let alone a movie. 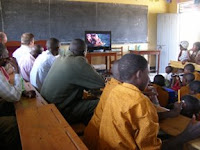 This will be first time that children are able to study in the evenings, a big change as night comes quickly, at about seven o’clock, on the equator. The DVD and television systems run well, and with the conservation movies that we donated and as George put it “Friday night is movie night.”

We also left behind a solar oven, which we had purchased in Kampala.

The only fuels in the village are firewood or charcoal and neither is a conservation friendly option, but the people need to cook. The oven was used for the lunch that the school laid on, and here Gorritt, the music teacher who coached the concert performers, prepares to cook a dish of cabbage. It was a great success, and the oven is now in regular use.


As George said in his speech, Kasenyi is now considered a model school, with everything needed to cater for a rounded education for the children. In Canadian terms to think of this as a model is to redefine the word.

The school at Kasenyi was built with government funds many years ago and caters to about one hundred and seventy pupils. The Equator Highway Primary School has a very different history. 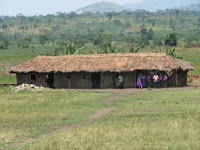 When the villagers in the area, about nine kilometers from the Congo border, were told that the government would not fund a school and that the children must get to the school in a nearby village, some eleven kilometers away, they decided to build their own. Here it is as we first saw it that year.

Kiiza George, the headmaster at Kasenyi lives in this village and he donated a big 2-acre chunk of land, as his own children need to go to school. His eldest boy is in grade 6 (called P6 in Uganda) and a star of the soccer side.

The year of our first visit in 2007 the structure was simply mud and sticks, with a thatched roof. We left enough of the donated money for them to buy metal roofing. When we returned the following year the parents had made bricks and put up a three-room structure, as well as a storeroom. The bricks were joined with a local mud called murram, as there was no money for mortar.

In 2009 we held a concert in that brick building. One of our own, Leighton Coma, played his composition, built upon Winston Churchill’s famous line Uganda is the pearl of Africa. It was a huge hit. Then the staff and parents laid on a slap-up lunch of local dishes.

However, the storeroom had morphed into a classroom, and the mud and stick walls, and tiny benches were still in use.

It is at Equator that there is the greatest need for help. At Kasenyi there is now a textbook ratio of one to two students. At Equator textbooks are shared, one per six children.

Kiiza George handed out letters written by Canadian children. The building in the background has grown out of the parent’s hard work and replaces the thatch and mud/stick structure seen at the top of the page

There are other examples of the needs at Equator. There are only ten school desks for 128 pupils. The floors are brushed dirt. The window spaces have no frames or shutters; there is no paint on anything. The office space has no security.

Another 2009 highlight for the children occurred when they went on a boat trip on the Kasinga channel. This was the culmination of a full day’s outing for them, for many of them their first ever. Forty pupils and three teachers from each school were enrolled in a community conservation initiative and after some talks and a lunch the children boarded the boats. The channel is the major tourist attraction for all visitors, and the children had a chance to see many kinds of bird, as well as hundreds of hippo and buffalo. 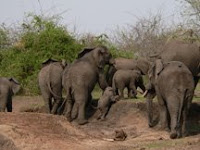 Elephants are a common sight, and one can spend long moments marveling at their antics. This was the first time that any of the children had ever been on a boat with an engine, although some of them have no doubt been out with their fathers in the local fishing canoes. The entire outing cost $100 for two boats and a day’s instruction. The funds came from Canadian donors.

The Canadian branch of Veterinarians Without Borders/Vétérinaires Sans Frontières (VWB/VSF) has supported our efforts and it is through their program that we can arrange tax-deductible receipts for the generous donations we have received and hope to receive in future. Staff, parents and pupils at the Chaparral school in Calgary have made a huge effort on behalf of the Ugandan children, and we anticipate being able to send another significant sum to VWB/VSF for onward transmission. The funds will be transferred to our special Uganda Wildlife Authority account and will be monitored by our friend and colleague Dr. Margaret Driciru so that we can be sure that they are used appropriately. Kiiza George is preparing a list of things most urgently needed for the Equator Primary School as we donated almost five thousand dollars to Kasenyi in order to set up their solar system.

My wife and I will return to Uganda in 2010 to link up with the schools, take more conservation-based video material and see what other needs can be met. We will also be able to report back.

Thanks again to all our generous donors. Your efforts have made a difference.
Posted by Jerry Haigh at 3:28 PM