This is the first of two blogs that I am posting on Sunday the 15th, as I have not had time to get to the Wi-Fi at the beautiful Mweya Lodge over the last couple of days. although the posting comes on Sunday, I am writing this on Friday morning early, as the first of the them.

We are now starting our fifth day in Queen Elizabeth National Park where the ten final year students form the Western College of Veterinary Medicine are continuing their studies on the wildlife x livestock x human interface. They too are struggling with the intermittent and rather slow Internet access, but have been trying to keep up their blog, which you can find here or at the above link 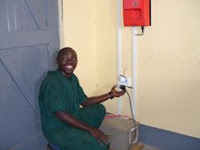 On Thursday I went with two students to Kasenyi Primary school where we met up with Robert, the installation technician from Ultratec who was there to install the new solar system that we have funded. It looks good, and we will do a formal opening on Saturday with the local village dignitaries and park authorities.

On Friday morning after our animal work visit to the school we paid a quick and checked that the power worked at the school. It did.

Here I have tried to add a short (44 second) video clip of a bull elephant's bullying attack on a hippo pod. The connection speed is too slow, and the link would not work. So, until we get to something faster, you'll just have to imagine it.

The Friday afternoon was set aside for the two-hour boat trip on the Kasinga channel that runs between Lake Edward and Lake George. The Canadians also paid for the two Makerere University veterinary students who have joined us. As usual it was a magic time, with tour guide Janet pointing out the dozens of bird species as we went along, and the snorting of hippos accompanying us along the shore. One very unusual sight was a bad-tempered and totally unwarranted attack by a big bull elephant on a pod of hippo. He seemed to be trying to stamp on one unfortunate juvenile that emerged as a tumbling rolling mass, and escaped, apparently unharmed, in the midst of the forest of legs that the bull must have presented. This clip was taken by Leighton Coma, one of our Canadian students
Posted by Jerry Haigh at 1:37 AM