Without doubt the biggest disappointment about our trip to Newfoundland has been the fishing.

As small stream trout fishing is my number one obsession when it comes to rod and line I was keen to get a chance at the famous waters on “The Rock”. 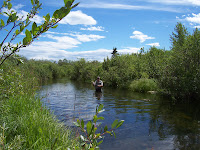 This photo was taken by similarly addicted Jim Oosterhuis as we fished a small stream in the foothills of Canada’s Rocky Mountains in July 2008 and this one was taken almost 40 years ago by Henk Faberij de Jonge below a waterfall on the Kazita river high up in the Mount Kenya forest.

Here is a good-sized rainbow from those Kenya days which was used to feed a camp of four the day before I had an exciting encounter with safari ants – I even had some hair (not much).

Here is Jim with a nice brown trout about to be returned to Alberta’s Bow River in 2008. 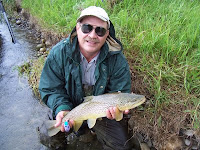 But I digress. We searched for medical conference for Jo, and after finding a family medicine one in Corner Brook, Newfoundland, I searched “Fishing Newfoundland” on my Mac.

Of course I got lots of hits. After winnowing out almost all of the ones on the first three pages of the Google list because they simply wanted me to stay at their Bed & Breakfast places or hire them as a guide, I made a couple of calls and was told that the fishing season had closed last year in late September and that both trout and salmon fishing were readily available all over the island. I would be able to stop at almost any small stream and dip a line. The major hit that came up was the Newfoundland and Labrador official 2008 Traveller’s guide, and it was plain that I could write away for a copy, so I did. It turned out to be one of the most useless pieces of paper (425 pages useless) that I have ever come across. There was nothing in about fishing, fishing seasons, fishing licenses, or anything other than references to fishing museums or one “Fishing Point Municipal Park.”

Perhaps for Newfoundland residents, who know their way around the island, the index of B&Bs, hotels and restaurants is useful. For the stranger it is merely confusing. You can get so far, and even find a night’s stopping point with as many or few stars to its name as you want, but can you find out where it is? Not unless you know the island.

In some cases I was even wrong about local knowledge. At least fifteen times locals agreed with me about the muddled guide and urged me to write to the ministry of tourism. Some of those locals make their living in the tourist industry. They do not seem to be impressed with the brochure, although they told me firmly that it is light years better than the 2007 version.

When I finally got to St. John’s and went into a fishing tackle shop to enquire about local flies and good spots I received a body blow. “I’m not going to sell you a license,” said the proprietor. “The trout fishing closes tomorrow.” He then showed me the 2008 Angler’s Guide, which had not come up on Google, and there it was. All trout waters closed on Sept 7th. At least half the reason for coming to Newfoundland had just gone up in smoke.

I later learned two things. Last year the trout seasons did indeed last until the third week of September, which would have suited me exactly, and some restricted catch-and-release salmon fishing is available until early October on three rivers. I did manage to get two-and-a-half days of guided salmon fishing on the lower Humber, and we saw some magnificent fish surface, but never hooked one.
Posted by Jerry Haigh at 1:46 PM