Gorillas, Conservation and Trouble in Paradise

Within the site it is easy to navigate to almost anywhere in the world, and two recent reports caught my eye.

The first is a well-edited film clip, is titled Turmoil Troubles Masai Reserve and its subheading reads “Kenya's tourism slump after the recent political violence is threatening the Masai Mara game reserve.” You can find the footage here.

It opens with a shot of a small group of elephants walking across the grassy plain but quickly shifts to an interview with a Maasai community leader who tells of his struggles to look after his family in the face of collapsing tourist industry income. The original post was made in March this year, and I do not have the most recent information about any recovery. Maybe a reader has more to tell us. Let’s hope it is less pessimistic than the clip. 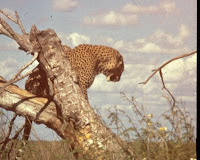 My own shots from the Mara bring back happy memories of several visits.

The second BBC item can be found by going directly to at this URL, or accessed through the gorilla wildlifedirect spot of the blog here about the desperately difficult situation in the Democratic Republic of the Congo and the park rangers who try to protect the Virunga area. They concentrate on two closely related things, gorillas and charcoal.

The most recent post on the direct blog tells of a horror story in a troubled land. The heading reads Ranger Shot 12 Times and Killed in Virunga by Rebels. Over to you.

On the lighter side, for a bit of what she titles “Tee hee hee” humour about my own blog series you can go to writer, director, actor and television host (not to mention award winner) Nicole Stamp’s blog.
Posted by Jerry Haigh at 9:28 AM