Two nasty stories about the current wave of elephant slaughter in Africa. They came a day apart and I’ll take them in chronological order. The first was a report in the Wildlife News blog by Kevin Heath of Sept 27 2012. He wrote about a new and horrifying technique in Mozambique where poachers were caught using anti-tank mines.


Heath also wrote "In June a gang of poachers including Zimbabweans had been caught using poison pills to kill the regions elephants for the ivory."


I have seen the results of land mine use on elephants in Sri Lanka. These injuries were almost certainly the result of accidental triggering of the huge number of munitions used in the long-running battle between the Tamil Tigers and the government.


On our trip to Sri Lanka two years we visited the Pinnawala elephant sanctuary. We watched a group of elephants cross the highway to bathe. 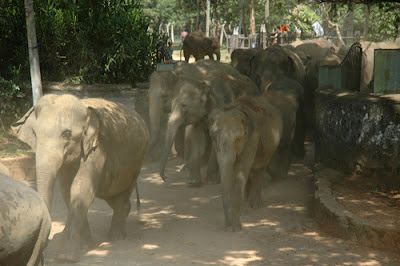 If you look carefully you can see that the very last one in the line has a severely humped back. 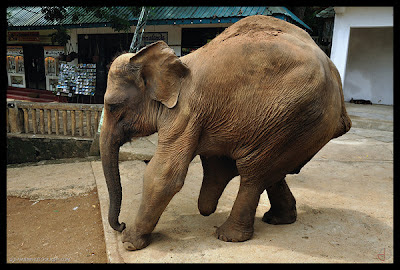 This picture, grabbed on line, is of that same animal as she struggles to get to the water. You can see why her back is so humped—she has had to transfer much of her weight to the rear in order to be able to stand. She is one of dozens of land mine elephant victims in the country.

If that can happen with a land mine, how much worse would an anti-tank mine be?

On a prettier and more cheerful note you you can see a large group of Indian elephants bathing in the river. The single cow joined them and appeared to be having a good time. Her mahouts were particualty loving and caring. 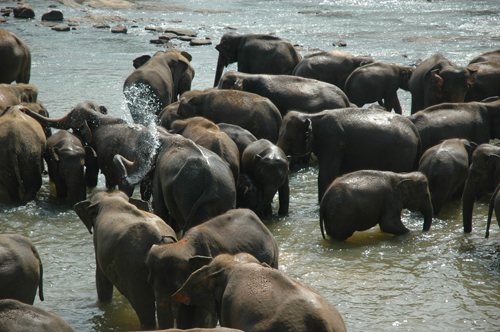 I’ll quote direct from his post, as it is both chilling and self-explanatory.

“Chad: September 2012. Zakaria Ibrahim, Brahim Khamis, Daoud Aldjouma, Djibrine Adoum Goudja, and Idriss Adoum—all dead, gunned down during dawn prayers. Where? North of Zakouma National Park in Chad, central Africa. When? September 3, 2012. Why? They were assassinated for protecting the last of the elephant herds found in the vast stretches between the Sahara Desert and the Congo forest.

When Fay first worked on surveys in Zakouma National Park seven years ago there were 3,885 elephants. A year later 800 or so of them had vanished. That was nothing. As he writes “In 2009 the number was down to 617. Today there are 457 elephants in Zakouma.”

In Fay’s post there is a simple link to his earlier story. All you have to do is click on the well-known National Geographic cover image to get his story titled Ivory Wars

There are ivory poaching stories coming out of several other African countries. Among them are Kenya, Tanzania and the more western forest countries like the DRC, Gabon and Cameroon. As I have written before, in some cases it has been the meat that was the main target, but there is no doubt that ivory still plays a huge role.

Several people have argued that we need to get at the end point of the poaching, the consumers, and there is plenty of evidence that a huge proportion of this demand comes from China. It is not just ivory. In a country with an alleged 95 billionaires and over a million millionaires, along with a long history of the consumption of wildlife, why should we be able to stop their cultural norms? Think tiger farms, think shark’s fin soup, think hardwoods, and so on, almost ad infinitum.

Fay writes that a friend of his said  “In China if you somehow managed to convince 99.9 percent of the population not to buy ivory, that 0.1 percent who remain unconvinced represents 1.3 million people still wanting to buy ivory.”

He wrapped his piece with.
“That’s three times more people than there are elephants left in Africa.”