Great trip south and west to visit family in Spokane, Washington. As we headed out we realized we would see a real cross-section of the prairies and the scenery through the foothills of the Rocky Mountains at a time when fall colours and migrating birds would be major features.

And so it proved. 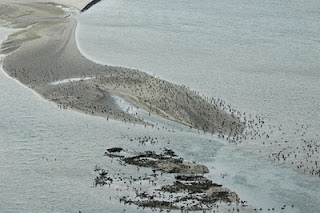 First up, a small group of a couple of hundred Canada geese roosting on sand banks in the South Saskatchewan River near Outlook during their midday break. 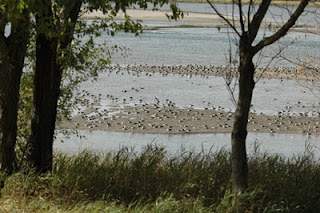 They had likely been out feeding on grain or pulse crop stubble since early morning and would head off for another feast late in the afternoon. Soon they will head south.


Then a slightly larger mass of snow geese zooming around as they settle on a typical prairie slough near Rosetown. 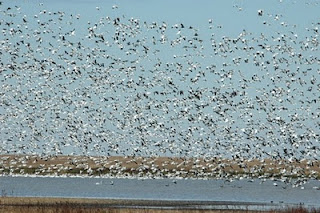 Although the numbers are beyond my ability to count, and I’m merely guessing at a couple of thousand in this picture, this was as nothing compared to other twenty and thirty hectare sloughs that we saw covered in what must have been tens of thousands of the birds.

A couple of hours later we were in the foothill country and I could not resist snapping picture of three things that are such an integral part of the Alberta scene. 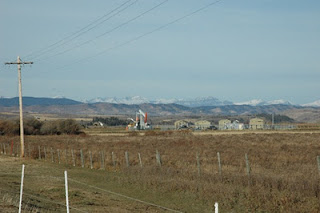 First, an oil derrick backed by the snow-capped ranges of the Rockies, and then, a few kilometres further south, 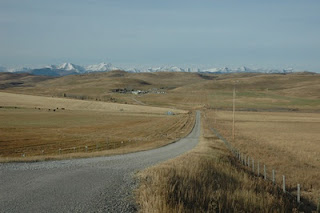 the extension of those ranges, but a large ranch in the foreground, with groups of Angus cattle.

Then we were up through the Crow’s Nest Pass and a complete change of scenery. 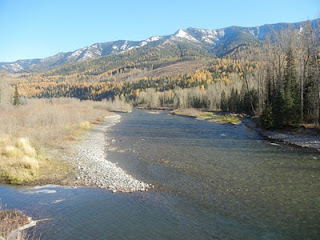 The Elk River near the town of Fernie is backed by more snowy tops and the contrasting colours of the spruce and yellow autumn show put up by hundreds of tamarack larch, with bare-boned poplars in the foreground along the river banks and willows on the sandy shores. 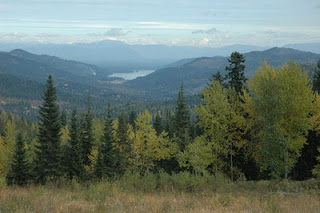 Down into the US at the Kinsgate border crossing and we were soon seeing vistas near Spokane. 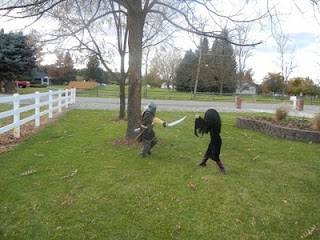 Visiting over the Halloween weekend and watching the grandchildren, dressed respectively as an orc and a vampire, getting ready to head out on their evening “trick or treat” expedition.
Posted by Jerry Haigh at 7:05 AM

What a beautiful area. The geese are amazing I have never seen huge flocks like that. Diane