From time to time stories appear on the Web that cannot be ignored. They are intriguing not only for what they report, but also for what they may have missed. Such is the case with two recent reports about that most fascinating of the great apes, the orangutan, which is held by many who have worked with this group of primates to be the most intelligent of all (after humans).

My own experience with them is limited, but many years ago, on a visit to the Singapore zoo we were introduced to an ancient female orang who was allowed out for walks with the staff. We were on a semi-official visit and as we walked along the ape held hands with my daughter and then, when we all (including the orang) sat on a bench she gently put her hand on my son’s knee as we contemplated the wonderful array of tropical plants around us.

Both of the web stories concern the use of tools. One is an account by Andrea Thompson, a senior writer with Live Science of how researchers in Borneo who have been studying wild orangs have noted that the apes developed the use of leaves to make a sound called a kiss squeak for communicating with other members of their species in the forests. You can find it here.
The other report is more whimsical and relates how zoo staff in Germany have given one particular female ape her own Facebook page. This after she learned to use a simple camera. Each time she does so she receives a raisin as a reward. The story can be found here
and shows how inventive zoo staff can increase public interest and hence zoo attendance with innovative ideas. 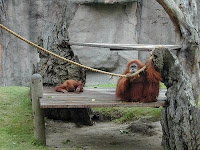 There are other stories about orangs that have not yet appeared in the popular literature, and deserve to do so, as they show even more clearly how smart these creatures really are. The most amazing also involves the use of tools and was told to me in 1988 late at night on a subway train in Toronto by my friend and colleague Dr. Lyndsay Phillips.

“I came into work one morning,” he said, “to find the place in an uproar. The adult male orang was sitting on the roof at topmost point of the primate house with the entire group from the enclosure. We took the calm approach and persuaded him to come down with an offering of food. He led the group back into the cage through the door used by the keepers, which was hanging open. Of course the director went ballistic and hauled the keeper staff over the coals for carelessness. Next morning it was the same, the orangs were on the roof.”

“I imagine the director was not impressed” I said.

“No, you’re right, but we took a measured approach. The keepers swore black and blue that they had double-checked everything. That night volunteers sat all night in the passage way near the door. Nothing happened. We assumed no more volunteers were needed and that it had just been a weird coincidence until the day after that, when the orangs were on the roof again. Now we had a serious situation on our hands.”

Now comes the amazing bit, as Lyndsay told it.

“We set up a video surveillance system and late at night a red hairy hand appeared between the bars and began to fiddle with the padlock. Several minutes later the hand gave a jerk to the lock and the door opened. The orangs headed out and up, to be found perched on high in the morning.”

Lyndsay switched to a brief side-bar.

“There’s a couple of things to know about orangutans. When you have them in captivity you need to keep an ice cream pail handy. You pick up nuts and bolts from the cage area until the pail is full. Then you lock the group into their night quarters and enter the cage to find all the places where the pieces you have found have been removed and replace them. Orangs are incredibly strong and have all day and night to inspect and fiddle. There is one female in our group who will pick up a broom when the keepers come to clean and help them sweeping. She knows exactly what she is doing.”

“So what happened?” I asked as the train slowed on the approach to the downtown station near our hotel.

“Well, long story short, I anesthetized the entire group and we did body searches. We found nothing. As a last resort I set up the portable X-ray. We did the big male first, and saw a metal object in his mouth, near his front teeth. There, between his lip and gum, he had a length of wire. He had become a lock-pick! Once we took the wire away there were no more escapes.”

In case you doubt this account, it is worth mentioning that a much drier version of it was published the following year in the proceedings of the annual convention of the American Association of Zoo Veterinarians. The meeting was held in Greensboro, North Carolina, and I was chairing a session on zoo safety. Lyndsay’s story was a perfect fit.
Posted by Jerry Haigh at 6:38 AM