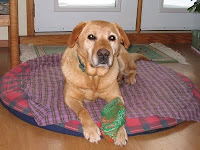 Because it is such an effective pesticide, and kills insects on contact, it is much favoured by crop producers. Farmers who apply it must do so in closed systems and one wonders how much risk the drivers of modern tractors, with their efficient air conditioners, are running. Can Furadan in a mist be brought back into the cab and create a hazard for the driver?
Posted by Jerry Haigh at 6:04 AM