Bushmeat in Madagascar and Asia


Two seemingly unrelated stories, one from the BBC and the other from the Wildlife Disease News Digest that came to me via their listserv once more showcase the subject of the bushmeat trade. The bottom line? Hunting is an old, old tradition and hungry people need to eat and will hunt the wild animals around them.

The first story comes from Madagascar and is headlined Lemurs butchered in Madagascar. Reporter Jody Bourton relates how the recent unrest and loss of law and order and “suspension of conservation aid” has led to wide-spread hunting and consumption of these already threatened or endangered animals. She sates

“The dead lemurs are sold to restaurant owners seeking to serve new delicacies.”

This may not be so much a story of hunger as of novelty. 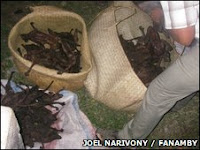 This picture shown in Jody’s report, taken by local non-government organisation Fanamby and released by Conservation International shows a basket of smoked lemurs available for sale.

"The problem of illegal killing of lemurs in Madagascar will only be solved when authorities act and are empowered. Also, the big donor agencies, the United States and Europe need to reinstate funding for conservation activities there immediately, or the advances of the past 25 years will forever be lost."

The other story comes from Asia and concerns a different type of bushmeat. In this case it is the world’s largest bat, the so-called large flying fox that is being hunted. The story by John Platt is headlined World's largest bat being hunted into extinction

The study that Platt refers to was headed up by Dr. Jonathan H. Epstein of the Wildlife Trust in New York City. It was published in the August 25 online edition of the Journal of Applied Ecology.
In his report Epstein stated that in Malaysia alone, 22,000 bats are legally hunted every year, and an unknown number are also illegally killed.
He went further to say that

“this level of hunting is unsustainable
for the number of bats in the country and will decimate this ecologically important species." 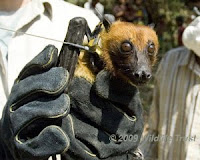 The only real way to gauge the size of these animals is to look at the pictures (© 2009 Wildlife Trust) that appear on Dr. Epstein’s report. 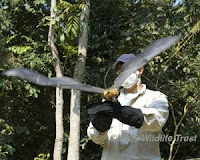 Keen observers will note that the man handling the bat is wearing protective clothing as well as a mask. I am sure that the garments are worn to protect not only the bat from human diseases, but vice versa. We do know that some really nasty viruses can be transmitted to people by Egyptian Fruit Bats in Africa. Check out Ebola and Marburg as a starter. I have not seen any similar reports about disease transmission from bats to humans in Asia, but who knows?

In this case the disappearance of the bats will have much wider implications than just one species. Epstein stated that the bats

"eat fruit and nectar and in doing so they drop seeds around and pollinate trees. So they are critical to the propagation of rainforest plants."

Jerry,
Thank you for featuring news of our Journal of Applied Ecology paper. To your point on the personal protective equipment shown in the picture, it serves two purposes: to protect us in the field from exposure to a zoonotic viruses such as Nipah virus and rabies, as well as from injury from being bitten (fruit bats look cute but have very sharp teeth!)

Bats of the genus Pteropus, also called "flying foxes," are known to carry henipaviruses (Nipah or Hendra) which are zoonotic and lethal in people and many other mammals. At Wildlife Trust we've been studying the ecology of these viruses, and the bats that carry them, in order to better understand how and when transmission from bats to people occurs. Hendra virus, discovered in 1994 in Queensland, Australia, is carried by Australian flying foxes, and has caused fatal infections in horses and four people - most recently a veterniarian who had exposure to an infected horse. Nipah virus, a close relative of Hendra virus, was discovered in Malaysia in 1998 and there it is carried by P. vampyrus. In 1997-9 in Malaysia, Nipah virus caused a large outbreak in domestic pigs, which also infected 265 people, killing more than 100. In Bangaldesh, Nipah virus has caused nearly annual outbreaks in people since 2001, with an avearage 75% mortality rate. The virus causes severe central nervous system disease (encephalitis). In Bangladesh, it is carried by P. giganteus (pictured here). These bats are ecologically very important animals and it is important to recognize that outbreaks of henipaviruses typically occur because of human-induced changes to the environment that bring bats and people and/or domestic animals into closer association. Transmission is not from direct contact betwen bats and people, but rather through indirect exposure. Infected bats excrete Nipah virus in saliva and urine. Fruit bats commonly feed on food and date palm sap, also eaten by people. Exposure may occur by eating fruit or date palm sap contaminated with bat saliva or urine. With are working with in-country colleagues, using satellite telemetry in our ecological studies (also pictured here), combined with epidemiological studies in bats and people to better understand when and why outbreaks are likely to occur. Our ultimate goal is to develop strategies to predict and prevent outbreaks.

Hey Jonathan,
Thanks for your insightful & useful comment. I saw the report of the vet in Australia who had contracted Nipah virus from a horse. I had not noted that he had died, but given the past history it is, sadly, not a surprise. The epidemiology of your fruit bat virus is fascinating. Several years ago one of the students who came with me to Uganda gave a seminar and mentioned the Nipah virus outbreak in pigs. We were studying wildlife diseases and the human x wildlife x livestock interface, so the subject was a natural as it was quite new at the time.