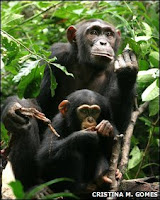 When I passed this BBC story URL along to groups of students who had been in Uganda with me one of them responded “and there are still people who do not believe that we are descended from apes.” A further thought: Why do dates among people often involve nice meals?
Posted by Jerry Haigh at 6:51 AM